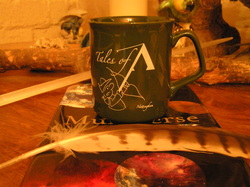 Lambda and the Non-Local Brew

Arriving at the auditorium for the final lecture of the first day, I sat down and felt a wave of relief crash over me. Starved for two years of any serious quantum-physical input, I found myself soaking up a buoyant presentation on "Acceleration - Then and Now", digging out my silver notebook to enter my very first note from this salubrious gathering of minds; "In higher dimensions, energy divergence takes place. Charge moves from source to field."


Now this might not mean a lot on its own, but put into context he was talking about the current conundrum presented by the Cosmological Constant, a measuring device intended to give an even keel to calculations on how the universe behaves. And I was amused to find confirmation throughout Lambda's presentations that there is a problem. They call it the CCP - Cosmological Constant Problem - and you know, you wouldn't believe it, but they have to change physics to solve this problem. Only, the more they change the physics, the more insistent the problem becomes, for if they try to amend things one way, the problem swings in the other direction. Among other disruptions, the CCP obstructs curvature, though why they should be worrying about that in a flat universe is anybody's guess (I was reminded of infinity, and my question at the Paris Cosmology Colloquium three years ago. That problem doesn't go away, either.)

The Cosmological Constant is a derivative of Planck's Constant, a measurement of the smallest amounts of movement allowed in the smallest objects measurable in the universe. As Cliff put it,
"We don't know what the hell's going on in the Planck scale, anyway!"
He went on to explain that everything has to be 'renormalised', musing as to why the energy field has to 'stay small', that higher dimensions can break the link between vacuum energy and curvature, and that some solutions are flat, while others are not flat... there is, apparently, "tension on the brane." You're telling me! If energy moves from brane to brane, but charge moves from source to field, where is the source that feeds the brane?

"The geometry is easy to break down with flatness," said Cliff helpfully, hinting at a possible reason why the flat universe is so fashionable. But there are loops in the brane, like the arcs of plasma on the corona of the Sun, and these loops explain, to me at least, how the interactive information exchange continues across the dimensional divides and makes our Universe less lonely in its quest for personal truth. There have to be "cancellations between the branes" for the maths to work at all, but still the Cosmological Constant Problem can't be solved.
"If Nature cares about the CCP, we'll know, " added Cliff with conviction. After all, they've decided that the Higgs SM is likely to be vanilla, so that should please everyone. "You may think you're seeing fluctuations where there are no fluctuations," he warned the assembly, but string theory holds up brilliantly, apparently, and Dark Energy is probably related to Hierarchy.
​
Having been rescued from perplexity by a Quark expert who took me under his wing as I drifted nonplussed out into the foyer, I arrived the next day for a final assault on Lambda cosmology before retreating to non-fluctuating dimensions where normal people live. Or should I say, I finally arrived the next day, having been held up by a breakdown traffic jam and running in too late for the first lecture - Non-Local Cosmology - one I was dying to see. I settled down to hear Sergey animatedly dealing with "Can Lorentz breaking help in solving the Cosmological Constant?" Well, no, Lorentz isn't much help, apparently. Sergey. too, was perturbed at why the sum of vacuum energies in the CC is so small (but not zero). He echoed Cliff, in citing normalisation as being achieved by "including terms with higher derivatives", only the problem there is that Higher Time Derivatives produce Ghosts, and physicists don't like ghosts. Spooky things are inconvenient and don't lend themselves to mathematical formulas. Nevertheless, it's worth noting from a subsequent lecture that given SUSY (supersymmetry), the Lorentz inversion emerges as an "accidental symmetry at low energies".

You can, however, take away all the dimensions to renormalise things, when the scalar field then becomes dimensional. Don't ask. I can't replicate the formula on my computer cos I don't know how to get the little numbers to be little, although I did write it down....
Now, infinity and flatness have been all the rage for quite a while, the former as a problem and the latter a solution. There's a new bird feathering the nest these days, screaming its presence all over Powerpoint shots from talk to talk. UV is familiar to everyone - UltraViolet is what sunscreen lotion aims to block out. UV does amazing things, it kills bacteria and sterilises stuff, it illuminates colours we can't otherwise see and because it's a high-frequency form of light, it has uses on Earth and in the universe too plentiful to list here. Only, to the cosmologist it's - yup, you guessed it - a problem. Normalising things using 'higher derivatives' includes stumbling over UV, and it causes a few headaches, just like infinity does. Cosmo's are given to 'splitting co-ordinates in spacetime', but it is apparently "inconvenient to analyse the UV structure where deviations from General Relativity are strong".

Dark Energy and Dark Matter are running around the cosmological circuit like a couple of out-of-control teenagers sticking their tongues out at the grown-ups. Nobody can agree on how much of the universe consists of them, or even whether they exist at all. But there are opportunities to be explored in operators for 4, 5 and 6 dimensions, and SUSY breaking in this dimension naturalises the co-efficients. Dark energy has to be decoupled from matter, otherwise the scalar field doesn't work. And to top it all, as Anne explained, there's a Chameleon Field out there helping out with the equations, which is nearly massless in nature but massive in the lab, offering potential mechanisms involving Gravitons, Chameleons, Symmetrons and Dilatons. Around all bodies from moons to black holes, there is a shell of space where deviations are high, while on each side of this space the scalar field radiation is relatively stable. The density of the scalar field is time-dependent, but the late time-acceleration of the Universe is not expected from General Relativity. There's a need to either modify gravity, or add more energy, for which Dark Energy is currently the prime contender.

Matt then described the Jerk, Snap, Crackle and Pop sequence. Going any further than Pop requires higher-order data. "Better to count photons than energy," deduced Matt. "You can take an estimate based on a large number of assumptions, and come up with Z," he said, the screen popping up an equation with Oz in it, which led me to think of Jack O'Neill. Way to go, Dorothy, I thought, as Matt went supernova. "Supernovae are not standard candles," he said emphatically. "There's a variability in the stellar magnitude and luminosity that cannot be explained." That'll please Jonas Quinn, who wants to become one, knowing from this that supernovae are unique in every respect, and respect is due to all those components of the Universe which trouble themselves to trouble Science. Young Daniel closed the 'parallel lectures' in truly motivational style with an exciting dialogue on Post-Newtonian Cosmology, but I was by then too tired to take more notes - he was the last presenter I watched before wending my way wearily home on a final shot of coffee, bombed out with quantum fluctuations and spacetime violators.

Concluding philosophically with another quote from the irrepressible Visser, "Humans tend to underestimate systematic errors, and we can generally multiply reported errors by a factor of 3. You should not put into your analogies things that are not needed for your reality check."

Goodbye, Lambda. I had a wonderful time. Congratulations to all those at Nottingham University who worked so hard to bring the joyous gathering together.